Q: When playing with multiple decks, what happens if a New Rule is played which is identical to one already in play?

A: In the vast majority of cases, when a duplicate Rule is played, it simply replaces the previous one, yet causes no change. For example, if Draw 2 is in play, and someone plays another Draw 2, it would replace the old one, and the old one would go into the discard pile, and the Draw would remain at 2 cards per turn.

Functionally, this would have identical results to playing your Draw 2 directly into the discard, and leaving the old one in play. You could choose to execute it that way, but it is important to remember that it is NOT a discard: it counts as one of your Plays, it just doesn’t make any change to the game state. For this reason, we recommend going through the formality of removing the old copy to the discard pile, and playing your new version to the table – at least at first, while you’re still getting used to the concept.

EXCEPTIONS to this would be if you played a new copy of Let’s Keep Doing That or Double Agenda, since these Rules have other cards associated with them which, when you play the new copy, would give the opportunity to change the associated cards.

• Let’s Keep Doing That (LKDT)
Put the old copy and its associated Action into the discard pile, and play your new LKDT. Then look through the discard for whatever Action you’d like to associate with your new play. Yes, you may choose to attach the same Action that was there before if you want.

Q: I’m a collector trying to find [OUT OF PRINT TITLE]. Any chance there’s some lingering stock or old demo copies at Looney Labs you could sell me?

A: Unfortunately, no. Although we do still have a limited supply of various old titles, we have a rather possessive attitude about them, given their rarity. Yes, we’ve been known to be generous at times, such as special occasions (like when we dug into our stash for prizes at LooneyCon) or hard luck situations (e.g. “my house burned down and I’m trying to restore a particular cherished item”). But for collectors trying to fill in the gaps, we recommend the secondary market — thrift stores, used game vendors, and of course, eBay.

One big issue we are faced with when asked this is the price tag: it’s very difficult for us to decide on an appropriate price for an out-of-print game. That’s the secondary market’s job. But the biggest reason we have for saying no to this type of request is fairness. There are a lot of fans would like a chance to get stuff from our dwindling supply of out-of-print games, and it’s only fair to limit such availability to situations in which everyone has the same opportunity, such as an auction or a raffle. Sorry. But good luck in your quest!

Q: Will Looney Labs be keeping their licensed Fluxx versions up-to-date with the shows they’re based on?

…You did the 13th Doctor to add to Doctor Who Fluxx…?

A: No, we don’t plan to keep up with what’s new on shows like Dr. Who, Star Trek, or Firefly. We’ve actually made a corporate level decision not to pursue any new licensed themed products for a while, and that includes expansions to stuff we’re already working with. Besides, it’s very difficult to stay current with new stuff that’s actively being made. Yes, we did that for the 13th Doctor, but that was an exception not likely to be repeated.

Q: What are the differences between Aquarius 1.0 and Aquarius 2.0

A: Well, the biggest difference is the move up to the larger 2-part box for uniformity of our games. We also had the art updated by a graphic design company. The changes are actually pretty subtle.

They made a new logo (new style for the title) but it works so well with the rest of the art we hardly notice it anymore. They also added some classy gradients to the card art, and variations in line width. Other minor changes include the goals having round images instead of square, and, necessarily the card back, since the logo style changed.

More exciting changes include the addition of diagonal-panel cards, and a new Action: Shuffle Hands. Speaking of Actions, Shuffle Goals was changed to the less-chaotic Rotate Goals. You also get to draw an extra card when you connect panels of more than one element with your play. The rulesheet, in addition to being in full color, also includes variations for a range of younger ages, so that you can start your kids young and gradually work them up to the full game.

If you’re interested in what else was going on at this time, here’s the blog post where Andy first talked about it. It’s just one paragraph among many, but it gives some interesting context.

Q: What are the differences between Aquarius 2.0 and Aquarius 3.0?

A: While it won’t change the fundamental awesomeness of Aquarius, there turn out to be quite a few differences:

1) Card size is changed to the narrower Fluxx-sized cards, and deck size is increased to 100 cards.

2) Triples (cards with one half-panel, and 2 quarter-panels, including both horizontal and vertical halves.

5) Number of Wild Cards increased from one to two, AND now usable as a Wild Action if so desired.

For more details on these changes, read Andy’s blog post about them.

Q: How can I easily separate two different Fluxx decks if I’ve mixed them?

A: Each version of Fluxx has some distinguishing feature. It’s almost always the font at the top of the card, but on some very early decks, we did fun things with the color stripe. Here’s an example of two of the “same” card from Star Trek (TNG) and Star Trek (TOS) Fluxx versions: 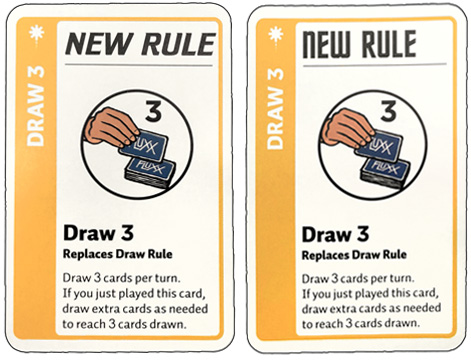 Q: I’ve designed a great new version of Fluxx! Can I get Looney Labs to publish it?

A: If you think your deck idea is so good we might want to publish it ourselves, you are welcome to submit it to us. But please understand that we will need for you to grant Looney Labs permission to use your ideas for free before we can even look at them.

Andy already has more unpublished Fluxx decks designed than we have in print, and chances are very good that he’s already thought of whatever it is you’ve come up with. Given this, we can’t risk opening ourselves up to claims that we stole ideas from you if we subsequently publish something that seems similar to an idea you suggested.

You are always welcomed to make one copy for yourself. But just one:
See: Can I make copies of my home-brewed Fluxx deck…

Q: Is there really a Star Wars version of Fluxx?

A: Yes, but only in Russian. The Russian publisher who licenses Fluxx from us also has the license to make games with the Star Wars assets… but that is much harder to come by in the US. We’ve explored all the avenues, and we’re unable to get that license. Unfortunately, we are not allowed to sell the Russian version from our own webstore in the US, however there are international retailers online who may have it.

Here’s Andy’s write-up about it (with images!) at his blog. (Note that at the time he didn’t know we wouldn’t be able to sell the Russian version ourselves.)

If you end up getting a copy (go you!) here is a handy reference:
Star Wars Fluxx: Russian: English Translation Table (pdf)

A: Yes, but only in Polish. Our relationship with Cartoon Network ended without us getting to make this ourselves, although Andy really wanted to, as he’s a big fan of the show. The good news is that the Polish publisher who licenses Fluxx from us also has the rights to make games with the Rick & Morty assets, so they have. As with Star Wars Fluxx, Andy did insist on doing the design work himself.

Q: I’m having trouble with my iOS/Android version of Fluxx. Who should I contact about that?

A: Looney Labs did not do the software for the iOS version. We worked with a company called Playdek, so if you’re having any technical difficulties with the app, please contact them at support@playdekgames.com