A: Yes, but wholesale mixing of entire decks can raise some issues, for which we have some suggestions. 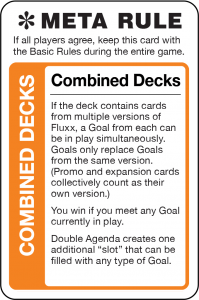 The main issue is the dilution of the Keeper to Goal balance. Although most of the Rules and Actions are quite flexible, the specific Goal set in any given version is designed to go with the Keeper set. So it’s harder to get Keeper sets that match the Goals which come up, since half the Goals only go with half the Keepers. Andy has noodled around to figure out what our recommendations might be to resolve this issue, and he came up with this MetaRule.

(The card says: If the deck contains cards from multiple versions of Fluxx, a Goal from each version can be in play simultaneously. Goals only replace Goals from the same version. (Promo and expansion cards collectively count as their own version.) You win if you meet any Goal currently in play. Double Agenda creates one additional “slot” that can be filled with any type of Goal.)

Beyond that, keep in mind that, although we have deliberately designed all Fluxx versions to have the same back so you can mix and match cards, particularly promo cards, not all versions “play well together”. For example, in Martian Fluxx, most of the Creepers are Humans. What do you do when you mix a different deck where there are Keepers who are Humans? Are they Creepers now?

Also take a look at all of the specialized Rules and Actions to see if there are any which might interact in unplayable ways, and consider which Rules might replace each other as “contradictory.” See if there are Keepers which might “count as” Keepers in the other deck. Create whatever house rules you deem necessary, and, as you should always do with house rules, make sure everyone knows the tweaks before you begin playing.