Q: I found reference to a deck of beginner Zendo rules sold separately, but the link to your store seems to be dead. Are those still available?

The old set of cards was just a handful of cards for beginners, with one rule per card. With the new set now available, we stopped selling the vastly inferior old cards intended for use with pyramids only. The new deck has several variables per card, meaning each card can generate more than one rule. Also, the old set had only beginner rules, while the new set has a range of difficulties (easy, medium, hard).

If you don’t have pyramids, and are looking to try Zendo, we encourage you to buy the new stand-alone version with the improved rule-generation deck.

If, on the other hand, you already have pyramids (at least five trios each in four colors, preferably red, yellow, green, blue), and want to try playing Zendo with pyramids… you’re in luck! For the Pyramid Quartet Kickstarter, we created a rule-generation deck in the new style, but for use with pyramids instead of the new shapes.

See also If I get the Pyramid Zendo cards, will I be able to play Zendo with my Pyramid Arcade set?

Q: Is there any time-limit for how long someone can take on their turn?

A: There’s no time-limit on how long someone may take for their turn, but annoying the other players by taking forever to make decisions may make them decide they don’t want to play with you very often. In other words, the only time limit is the tolerance of your fellow gamers.

Q: If I get the Pyramid Zendo cards, will I be able to play Zendo with my Pyramid Arcade set?

A: Well, sort of. The trick is piece supply. The reason we didn’t feature Zendo in PA is that the piece mix is optimized for games that need a lot of colors, but only a few trios of each, whereas for Zendo you need lots of the same pieces in just a few colors, hence the standalone version’s inclusion of just 3 colors.

The new cards are designed to be as flexible as possible with regards to color, since we can’t know what particular colors you might have in your collection of pyramids, but it still considers just red, yellow, and blue, and plenty of them, to be the best set of equipment. That said, many rules don’t use color at all, and these cards certainly work with the PA set.

If you pick up a Homeworlds set to add to you your Pyramid Arcade set, you will have 6 trees each of red, yellow, and blue which is a great set of pyramids for playing Zendo.

Q: We noticed that in some places, Zendo is listed as playable with just 2 players? Where can we find the instructions for that?

A: Yes, we had previously listed Zendo as needing a minimum of 3 players, but when we came out with the second standalone box set, we worked out some ways to play with just two people. Eventually we hope to update those older online references. In the meantime… you can find those instructions HERE!

Zendo was originally designed for three or more people, but there are a couple of ways to play with just two.

Puzzle Mode: This option is basically assisted solitaire. One player simply serves as the moderator for the other, marking new structures when called upon, and building counter-examples as needed when guesses are made. There is no need for guessing tokens or quizzes.

Head-to-Head: If you’re feeling competitive, players can alternate roles and compare scores. A game will consist of two rounds, with each player solving once and moderating once. After each round, the player will receive a score, based on how long it took them to guess the rule. The player with the lower score wins!

Score: Your score will be the total number of structures on the table at the end, with additional points added for any structures that were broken down during the game. You also receive two extra points each time you guess and are incorrect. Guessing tokens are used to track extra points for incorrect guesses and dissolved structures. There is no need for quizzes, so guessing stones will not be used for any other purpose. Be sure to make a note of the first player’s score before starting the second puzzle.

Q: What size are the new Zendo pieces, relative to regular pyramids? Would they fit in a Volcano board?

A: The pyramids in the new Zendo set are the size of a medium Icehouse pyramid, and the other Zendo pieces have the expected proportions, in other words the square base shape of all of them is the same size. So they will fit in a Volcano board just fine, but they’ll be a little smaller than the squares, since the Volcano board is designed to hold a large.

Q: Could I get the Rule cards from the new Zendo to use with my pyramids?

However, as part of the Pyramid Quartet Kickstarter, a deck of cards in the new style was created for use with pyramid-based Zendo games. Pyramid Zendo Cards

Q: When using a Rule in Zendo which has a decoy spot, am I required to put a clip on it?

A: Usually, but not necessarily. You should always be putting two clips on the Rule card, but in some cases there are two halves of a Rule you could mark, and you only need to use the decoy spot if you’re only using one half of the qualities listed.

There are just three cards in the base set where the decoy spot might be left unused. Those cards are:

5: A structure must contain at least one:
[yellow/blue/red] [decoy] [block/pyramid/wedge]

26: A structure must contain at least one UNGROUNDED:
[yellow/blue/red] [decoy] [pyramid/block/wedge]

So let’s take a look at the first one, and see what kinds of rules we could make out of it, using two clips. 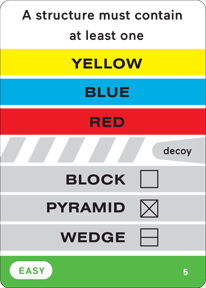