Also be sure to check out All Fluxx FAQ for more general questions. Though the board game has some notable differences, you may find that there are useful answers there.

Q: The pegs in don’t stay in well for Fluxx: the Board Game. What can I do about that?

A: Here’s a fun graphic we put together about this: 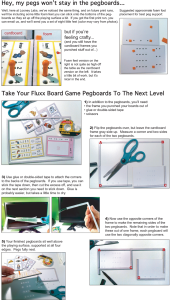 Q: In Fluxx: the Board Game, can one score a Goal in the middle of one’s move phase?

… or can you pick up multiple Goals as you’re moving?

A: You can claim a Goal card at any point during your turn. As soon as you meet it, you get it! So yes, you can collect more than one in a single turn.

Instead of thinking of it as a “move phase” or picking up Goals “as you’re moving” remember that each “step” you take is discrete (separate), so you can move one space, play a card, then take another couple of “steps” if you have moves left (as noted in the paragraph under Turn Sequence, in the rules).

Q: In Swap Colors and Rotate colors, it says you have to do it “either before or after you conduct all of your moves” but that’s not a restriction at all–?

… Did you mean “You must do this either before you conduct any of your moves, or after you conduct all of them”?

A: Since, as you’ve noted, your first interpretation results in a restriction that is not a restriction, perhaps you can infer that, yes, we meant it to be interpreted in the way you’ve indicated in the second half of the question. That said, of course it is more clear with your suggested wording; we have made a note to update those cards on any subsequent printings.

Q: When Wrap Around is on, can pieces wrap when exiting the Start tile?

A: Yes. When Wrap Around is on, pieces can wrap around from the Start tile if it is at the edge of the configuration. Remember you can only exit the Start tile at those places indicated by the arrows, of course. See diagram below for an example of how wrap would work when exiting vs. entering the Start tile. 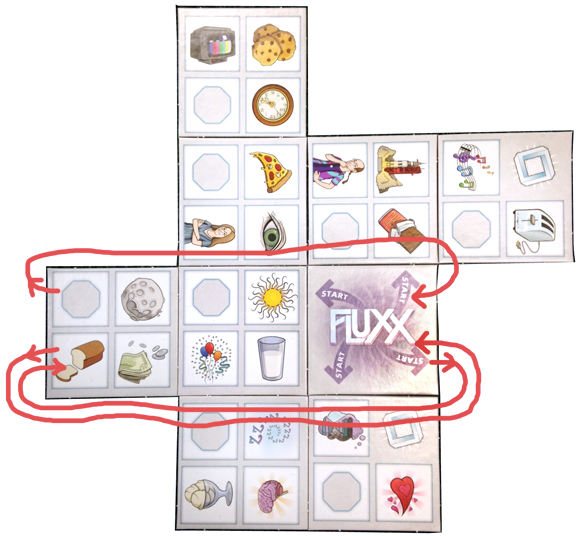 Q: When the Wrap Around Rule is ON, does the Bump function also wrap?

…In other words, can you Bump a piece to an “adjacent” space which is wrapped around on the other edge of the board?

…I understand that it uses up a play to put the card on the stack to make it available for ANYONE to complete, but what if I’m just gaining it directly from my hand without playing it to the stack at all?

A: There really isn’t technically any difference between completing a Goal “from your hand” vs. “from the stack”. When you use a Goal “from your hand” it just means that YOU are the “anyone” who’s completing the Goal you just played. The only difference is that you didn’t put it into play with any time for anyone ELSE to win it except you. You still have to put it into play (i.e. play it) for it to be available for you to claim.

Basically, it always takes a play to use any card from your hand for anything.

We simply concluded that one doesn’t actually need to go through the motions of putting the Goal on the stack, just to pick it right back up it up again and put it in front of you. That said, some people do sort of symbolically wave the Goal towards the stack before claiming it.

Q: Can my opponent deliberately Bump my piece in a direction that lets them Bump it again, just to move me further from my objective?

…My piece was close to one of the blocks for the current goal, so my opponent decided to Bump me because I was in his way while he was moving to the same block. Instead of Bumping me to a block not in his path, he Bumped me to the block in his path, thus Bumping me a second time when he made another move in order to get me as far away as possible from the block I was targeting.

My interpretation of the Bumping rule is to strictly move someone out of your way, not to keep Bumping them repeatedly so as to prevent them from getting closer to a certain block.

My opponent’s interpretation is that his Bumping multiple times is a strategic move and there is technically no rule stating he cannot repeatedly Bump someone in the same turn.

A: I’m afraid there is nothing in the rules that states that Bumping can only be done to “move someone out of your way.” The rules say that you can move a piece to “any unoccupied adjacent space” with no restrictions about the Bumping player’s intentions or future movements, and no restrictions on how many times you may Bump the same piece.

Notice that the rules explicitly say you can Bump your own pieces. Why would you ever want to do that? Only for strategic reasons, of course.

So yes, for strategic reasons, your opponent would naturally want to Bump you as far away from the goal you’re pursuing as possible. Sorry…

Q: When using the Uproot action in Fluxx: The Board Game, what does it mean for tiles to be “reachable” from the start tile?

Do all tiles have to end in a position still touching the Start tile? This would make it seem that one could only swap tiles, but wording regarding “leaping gaps” implies this is not the case.

A: When Uprooting a tile, “reachable” from the Start tile just means that it could be traveled to. Look to the further wording about having tiles touch side-to-side. It just means you can’t make a tile be attached only at a corner. It would be impossible for a piece to reach that tile from the start tile under normal starting conditions (i.e. without Wrap-Around in play, for example).

All tiles in F:tBG must be placed so that at least one full side aligns with another tile.

Q: Can I move the Start tile if Uproot is set to YES?

A: No, you may not move the Start tile. Thought that was in the rules, but I guess it’s not. We should update that on subsequent printings.

A: You would trade or rotate your original hand away – the one you set aside at the start of the first set-your-hand-aside Action. The hand you receive through trade or rotation would then become your new set-aside hand, dormant until all of the D3P2/D2&U/Fizzbin cards are fully processed.