…I have friends say you ignore the random last card since you don’t have anything left to pick from. Or do you pick the last card to be played first and set it aside and then continue your turn ending with that last card that was picked?

In fact, this exact problem is the reason we switched Last Card Random to First Play Random: under any rule set which would have you playing all your cards (Play All, or an extended Play more than you’re Drawing per turn) it would seem that your last play could not be truly random, since you only have one card left as your last play, and that’s confusing and anticlimactic.

While we’ve heard of some people playing that second way, where you pick the last card randomly at the beginning, and it’s fine to have a house rule like that if everyone agrees, there are various reasons why we do not endorse that way:

The rules could change significantly from the beginning of your turn to the end. What if you choose your “final card” at the beginning, and then, mid-turn you change the Play All to Play 2, and your turn is suddenly over with that last card card played. Oops! You didn’t play that card you picked. This situation would render your last play not-random no matter which way you were choosing to interpret that card.

If you’re Playing more than you’re Drawing, and you choose your “final card” but then end up getting way more cards in your hand, either by increasing the Draw rule, or playing some Action which adds cards to your hand, then those additional cards were not in the running for your original “random last play pick.” So you might end up having cards to choose from in the standard way for Final Card Random (randomly from more than one card at the end) and yet you already picked something a different way, from a pool which didn’t even include those extra cards.

Or what if you pick that “final card” in advance and then… Trade Hands? There are so many ways which foil the “pick your last card to play at the beginning of your turn” solution.

Our best answer for you, if you’re going to have some house rule to solve this dilemma, is to treat the card as if it were what we ended up changing it to, which is First Play Random. That’s very easy to implement. You still ignore it if you’re only playing one card, but you simply pick a random card from your hand to be your FIRST play, instead of your last. Then that’s done – you played a random first card – and you can proceed with the rest of your turn, without worrying about all the wacky stuff that could happen by the time it’s over. 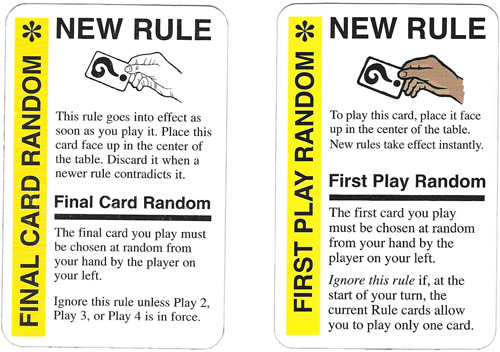